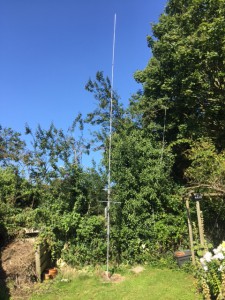 I have been doing some work on the mast and since the weather was good for  a change I thought I better take a picture of my HF8V (actually an HF6V with the 17m and 24m add-ons). I will be taking it down once the Ultrabeam UB20-Mx arrives.

This antenna has been the mainstay of the G0MGM station since 2011. Even though I would have liked to install it in the centre of the garden so I could get a  nice and easy radial installation, it proved impractical and not to the liking of the XYL! So it was installed at the back corner of the garden. Thia had some good and some bad points. The good points meant that it was out of the way and hidden from view by some trees and also it was as far away from the house as it could be, meaning is have a low noise floor.

The bad points were the long coax run and also running in radials was difficult, I could not get a nice symmetrical layout of the radials. The bushes behind the antenna are on the other side of the fence and in a disused field. I ended up putting 15 random length radials (5m-15m long) mostly in my garden. I ran a couple of long radials along my fence line  and two out into the field behind. I have been lucky that they have not been damages as no one has done any work in the field.

With these radials and a radial plate made of copper ground rods from equipment rack, this allows me to tune from 80m through to 10m with good resonance on all bands except 17m. SWR is 1.3:1 or less on all appart from 17m where it is 2.2:1.

It has worked very well and is great for running WSPR from my Ultimate 3 kit on multiple bands.

I am planning to replace the HF6V with a 43ft vertical piece of wire to see how that will work for 30-160m when the beam is up. I am also planning on playing around with a 40m delta loop again. Since this has been sucah a good antenna I am sad to see it go and will keep it to play with whilst portable, if I get the chance!