I had the chance to go to Dayton this year. Its one of the places I always wanted to go to but never had the chance. I was invited by my friend Jim, AJ8S, to stay with him and his wife Rosemary. They live close to Dayton so it was an invitation I could not refuse.

We went to Dayton on all three days and I spent a few pennies at the hamfest. We parked in the day carpark and got the bus to the hamfest. I was amazed at the size of the boot sale, and also by the amount of ‘junk’ that was available.

I was looking for a couple of things, mainly an Alex Loop magnetic loop antenna and a QRP rig, I had set my mind to getting a Elecraft KX3. Then when I got to the Elecraft booth around midday on the friday morning I saw the new Elecraft KX2, it was great little rig and was just what I wanted but just my luck, they sold the last one they had as I was placing my order. I was not sure what to do and took another walk around the show.

I found the Alex Loop at the HRO stand and got it. Jim has one and was very pleased with it. Still deliberating what to do about the Elecraft I walked past another company selling QRP radios. I will post what happened in another post but siffice it to say I bought one of their little, and I mean little, radios.

I used to have my screwdriver antenna on my car and in the UK the Little Tarheel II looks big, but it is nothing compared to some of the other antennas seen in the car park at Dayton. 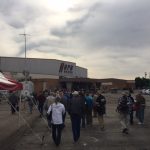 Walking to the entrance 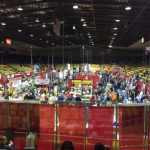 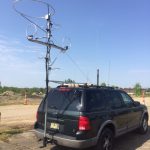 I will post more from my visit to Dayton soon.