I ran into an issue with this way of setting the radio up. There are a number of small airfields and we have Heathrow airport a few miles away and I sometimes like to listen to the Towers and aircraft as they fly past. So I wanted to program the airband frequencies into the radio but every time I tried to do so using the CS5100 software and the SD card it would come up with an error message and it would not load into the radio. It was odd a I could save the frequencies direct on the radio and to the SD card, but when I edited them or added some more from the PC it would again refused to load up those frequencies. 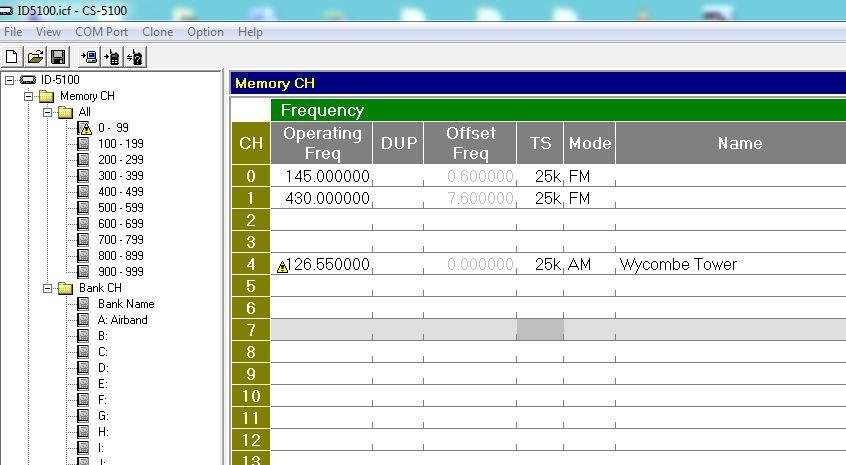 We have had a reply from Japan regarding programming airband frequencies. Together with some research of our own we have come to the following conclusions :

With the reply from Japan and a bit of investigation this end I have found out why you cannot program the Airband frequencies directly into the ID-51 and Id-5100 (this may also apply to any other radio with an SD card reader).

There are restrictions by Country on the frequency ranges any radio can be programmed with. The software  gets the version type (country of use)  of the radio by reading in the frequency  data from a directly connected radio (via the clone lead).

When using an SD card the software does not know what radio the programmed data is for so you get Yellow Triangles for Airband and any other frequency that our outside the lowest common denominator.

Once you have connected the radio directly and read in the data from it, you can then program any of the permitted frequencies into the software even after the radio has been disconnected. You are also able to edit the file read from an SD card  in the software.

For the customer to program the Airband frequencies into an SD card for his radio he need to read from his radio first  with a clone lead.

It is a requirement of approval, that any radio supplied must comply with the country of use frequency plan.

So after all that I still needed to get the USB programming lead. I did so and yes, it now all works fine and I can now program any of the airband and maritime frequencies in. I wish this had been put in the manual!

Hope this helps anyone else who might be having this issue.