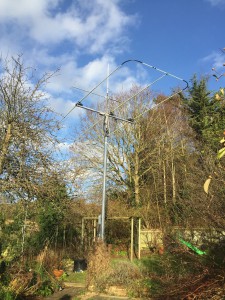 After quite a few problems in getting the antenna up on to the mast, with the invaluable help of Andrew, G0RVM, we managed to get the antenna up in during the weekend of Storm Desmond. This storm caused a lot of flooding up in the Lake District. We had some strong gusts here during the day so my heart was in my mouth a lot of times. Some of the issues which delayed the installation included operator error in breaking the rotator cage, and the main one being all of the foliage and tree limbs near the mast. Its bigger than I thought it was going to be! Right now I cannot rotate the antenna fully in its lowered position as in the picture due to the tree behind it. This will be remedied on January when the tree will be pruned. Moving the antenna around the garden was an interesting exercise but it proved to be very sturdy.

I have been testing it using WSPR and I’m quite impressed with the results, I will do another post on that later. Also on my first tries on it, I managed to break a mini pileup into Jamaica on 17m which has never been a good band for me, and then shortly after that I managed to break a SSB pileup on 20m for J52HF on the second go. So far so good!